The DNA Doe Project was founded in 2017 as a 501(c)3 non-profit corporation with a simple humanitarian mission: to identify John and Jane Does using genetic genealogy. On March 5, 2018 we solved our first case – Robert Ivan Nichols, the John Doe previously known as Joseph Newton Chandler III. On April 11, 2018 at a press conference in Troy, Ohio our identification of Buckskin Girl as Marcia L. King was announced – the first time in history that the world learned of the power of genetic genealogy to solve cold case identifications.

DNA Doe Project is an all-volunteer organization with over 60 experienced genetic genealogists giving their time and passion to our cause. In addition, we raise funds to cover the expensive lab costs involved in extracting and sequencing DNA from remains whenever an agency is unable to afford them. For this we are deeply appreciative of our generous donors who have supported our organization and helped bring about our more than two dozen success stories. 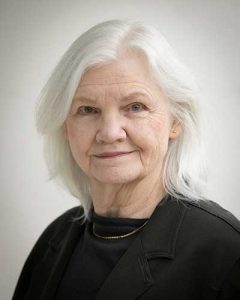 To answer her burning question “How can genetic genealogy help identify John and Jane Does?” Margaret Press co-founded the DNA Doe Project in 2017 with Forensic Genealogist Dr. Colleen Fitzpatrick. After months of work hunting down labs, experts, bones and donations, they tackled their first case in September 2017 and incorporated as a non-profit the following month. The subsequent success stories have provided the answer: persistence, patience, and a team of skilled and spirited volunteers. That’s how it’s done.

Margaret grew up in Los Angeles, California where at age 15 she inherited a passion for genealogy from her grandmother. She graduated from UC Berkeley with a degree in Linguistics and subsequently earned her doctorate at UCLA, specializing in Native American languages and child language development. From her extensive field work she published a descriptive grammar of Chemehuevi, a nearly extinct dialect of the Uto-Aztecan family.

While working most of her life in software development, Margaret also fell into mystery writing. Two published novels set in Salem, Massachusetts were followed by essays and short stories, and a true crime based on a 1991 murder in her own neighborhood. The book inspired several documentaries, including an Unsolved Mysteries segment in 1996 and a 1998 episode in the A&E series City Confidential. She has also taught numerous courses in mystery and crime writing.

When DNA testing redefined the genealogy landscape, Margaret joined the impassioned group of citizen scientists who would propel this new field to where it is today. She began with setting up several Y-DNA surname projects. Once autosomal testing reached critical mass and its potential became apparent for helping in unknown parentage searches, she – like many others – became hooked on the unique challenges of building family trees forward in time, rather than backward. The satisfaction that comes from helping an adoptee is profound and addicting. But extending this methodology to her current mission –  returning a name to an unidentified victim – brings a whole new level of reward.

Margaret is a proud parent and grandparent, with descendants of her own to carry her mitochondrial haplogroup C1d and passion for genealogy down her family tree.