Description
On August 26, 1979 an unidentified, headless male torso was discovered by a family hunting for arrowheads in Buffalo Cave in the state’s Civil Defense Caves in Clark County east of Dubois, Idaho. Wrapped in burlap and wearing dark colored pants, white shirt with blue pin stripes and maroon sweater, the torso was buried in a shallow, 18-inch-deep grave.

Twelve years later, on March 30, 1991, a mummified hand was found partially buried on the cave floor by an 11-year-old girl exploring in the same cave system. When officials conducted more excavating in that spot, an arm and two legs were found wrapped in burlap. Despite extensive searching by volunteer staff and students from Idaho State University over the years, no other remains, including the head, have been discovered. 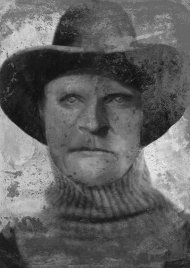 Joseph Henry Loveless was a colorful character and, at the time of his death, he was being sought by Clark County for murdering his wife and escaping from jail.

Joseph was born on December 3, 1870 in Payson, UT to Joseph Jackson Loveless and Sarah Jane Scriggins Loveless.   Joseph married Harriett Jane Savage in 1899 (age 28), had a child, and then was divorced by her in 1904 (age 33).  The next year (age 34) he married Agnes Octavia Caldwell of Bear Lake County, ID and had four children.

Joseph was a career bootlegger and, during this time, had a number of aliases, including Walter Cairins/Curran/Currans/Cairns/Garron/Curnans and  Charles Smith.  Joseph/Walter/Charles was arrested a number of times in 1913 (age 42) and eventually had warrants out for his arrest on bootlegging, other liquor violations, and escaping jail.  On May 5, 1916 (age 46) Agnes Loveless was murdered with an axe by “Charles Smith”, and Joseph/Walter/Charles was arrested.   On May 18, 1916 (age 46) “Walter Cairins” escaped from jail by sawing through the bars using a saw he hid in his shoes.  It was reported that Joseph/Walter/Charles lived in a tent on the outskirts of Dubois, Idaho in 1916.

An interesting note is that “Joseph Henry” had a headstone with no death date in the Loveless family plot in the Payson City Cemetery, Payson, Utah.  However, investigators found no interment record associated with the

This case was donor-funded.  The goal was $2,300.
Thanks to the generosity of the Dyer Family Foundation, the listeners of Crime Junkie Podcast and other donors we are able to top off our goal for Clark Co John Doe.  He is now fully funded.