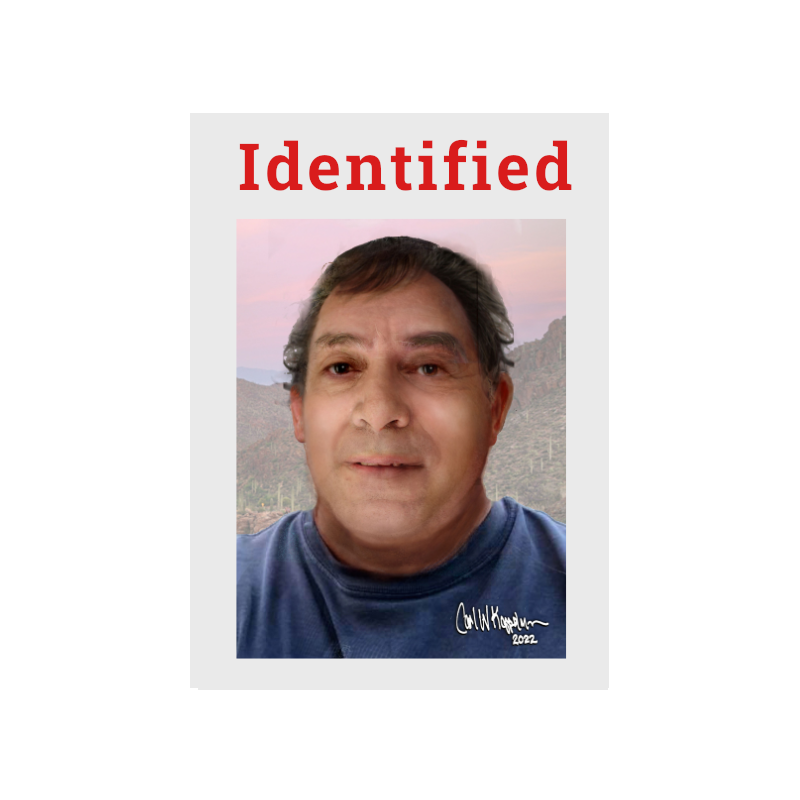 Description
On July 28, 2019, a man was found unresponsive in the parking lot of a shopping center in Tucson, Arizona. He was described as a Caucasian adult male between 45 and 65 years old, 5’11” tall and weighing approximately 280 lbs. His hair was gray/partially gray and he had brown eyes. Scars were noted on his outer right thigh and left knee, and a surgical plate had been used to repair a fractured left tibia.

The man was wearing blue shorts and black sandals. In his possession were a black flashlight, loose change and a key fob that included an old Mazda car key.

Tucson, AZ – On July 28, 2019, a man was found unresponsive in the parking lot of a shopping center in Tucson, Arizona with no identification and keys to a car that was not in the lot. After three years, the Pima County Office of the Medical Examiner and the DNA Doe Project have confirmed his identity as James “Mark” Chaparro, who lived less than half a mile away from the place where he was found.

Mr. Chaparro was 64-years old when he died, and had been raised in Santa Fe, New Mexico. Researchers located records from October, 2019 of an eviction for non-payment of rent at his home near where he died. It’s thought that he had walked to the store and simply never made it home. According to family members, they believed he was living in China so they never filed a missing persons report in Tucson.

Bruce Anderson, Forensic Anthropologist with the Pima County Office of the Medical Examiner brought the case to the DNA Doe Project in the spring of this year. Four expert volunteer investigative genetic genealogists from the non-profit organization began work on this case in June of this year, and were able to place John Doe in a family tree that was complicated with adoption, misattributed parentage, and Hispanic ancestry – notoriously hard to trace as that ethnicity is underrepresented in the public database at GEDmatch.

The team built a family tree going back to Mr Chaparro’s great-great-great-grandparents in order to fit matches they found in GEDmatch into the tree. “We had a first cousin once removed that shared 153 centimorgans with our Doe, and another first cousin once removed who shared 21 centimorgans with him,” said Christina Lauritsen, co-team leader. Centimorgans are a measure of how much DNA is shared between two people. While it’s unusual to see that kind of discrepancy, it’s not unknown.

“This case demonstrated how instrumental investigative genetic genealogy can be to solving cold cases,” said Karen McDermott. “Within two weeks, our team had identified a potential candidate, who was later confirmed through medical records.”

Team member Erin Hanson added, “It was a privilege to work with an agency like the Pima County Office of the Medical Examiner. They work hard, for as long as it takes, to identify a person that ends up in their office without a name.”

The DNA Doe Project wishes to acknowledge the contributions of the groups and individuals who helped solve this case: the Pima County Medical Examiner’s Office, who entrusted the case to the DNA Doe Project; Genologue for extraction of DNA from bone and whole-genome sequencing; Kevin Lord of Saber Investigations for bioinformatics; GEDmatch Pro providing their database; a generous donor who covered the cost of this case; and DDP’s dedicated teams of volunteer investigative genetic genealogists who work tirelessly to bring victims home.

A generous donor provided the funds to help cover the costs involved in solving it. Funds donated pay for expensive labwork and operational support of our volunteer team of investigative genetic genealogists. DNA Doe Project is a 501(c)3 non-profit. Donations are tax-deductible to the extent allowed by law.