Message about the Recent Changes at GEDmatch

Statement by the DNA Doe Project

On 18 May, GEDmatch changed its Terms of Service (ToS) to make opting-out the default for its members. GEDmatch is the database used by DNA Doe Project and other genealogical groups that use genetic 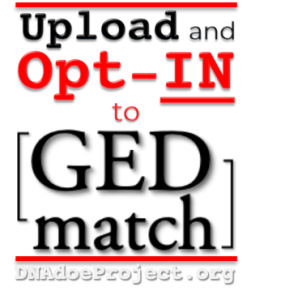 genealogy to work on forensic cases.  GEDmatch users must now consent (opt-in) before their kits are made available for comparison to law enforcement kits — including those of our Does. Our understanding is that regular genealogical use of the GEDmatch database will continue, but access to matches by law enforcement is now limited to only those users who take the extra step to opt-in.

Our cases have always been challenging, and bringing resolution to our Does may now take additional effort. However, we hope this situation is only temporary. While we wait for the number of GEDmatch opt-ins to increase, we will upload our Does’ DNA files to Family Tree DNA to access its database of about a million kits.

In the meantime, we encourage EVERYONE WHO HAS UPLOADED TO GEDMATCH TO PLEASE OPT-IN after reviewing the ToS updates and to spread the word about these important changes. We expect that repopulating the GEDmatch database to a useful size will likely take a while. However, the sooner we educate users and share the news about the importance of opting in, the easier it will be for us to carry on with our mission of identifying Jane and John Does through genetic genealogy.

Our highest priority is to support and protect GEDmatch as a valuable resource for everyone to use.

To follow the opt-in numbers for several of our cases, click here: Current match numbers for DDP cases

As always, we thank you for supporting the DNA Doe Project.

Remember, those interested in transferring their DNA data to GEDmatch should make sure to read through the Terms of Service and ensure they are comfortable with participating.

Steps to Opting-IN at GEDmatch.com

For those who have already purchased a DNA kit and uploaded to GEDmatch.com

Note: As always, we recommend that consumers thoroughly research options before purchasing or making decisions.

Reasons to Opt-IN at GEDmatch and Participate at FTDNA

Those generous individuals who upload to GEDmatch and opt-in help the DNA Doe Project to return names to John and Jane Does and provide much-needed answers for their families. But, there are many other reasons to upload and opt-IN.

Here Are a Few of the Benefits of Uploading, Sharing: and Opting-IN

By sharing your kit, there is an increased chance that a violent criminal may be apprehended.  This will help protect the lives and well-being of future victims.

Many of our Jane and John Does are minorities or recent immigrants from countries where DNA testing is less popular. Due to the drastic decrease in available matches at GEDmatch, the task of identifying these Jane and John Does belonging to underrepresented ethnicities has become much more difficult.

Look for Clues on Missing Family Members of Your Own

Much like the DNA Doe Project uses DNA matches to find the identities of John and Jane Does, individuals may find success researching their own families. For example, GEDmatch provides an important service to adoptees.

Still looking for that elusive Native American DNA? Curious consumers may find even more clues to ethnicity and gain greater insight to admixture possibilities through a broad spectrum of ethnicity estimates at GEDmatch, including the same admixture tools the DNA Doe Project uses for our Jane and John Does.

GEDmatch offers genetic genealogy analysis tools for free that aren’t always offered by the DTC companies.  These include the “Are Your Parents Related” tool. Access to Tier 1 advanced tools is also available for a $10 per month subscription that helps support GEDmatch.

GEDmatch includes users from all the DTC companies, including many that may not show up on DTC match lists because they fall below a predetermined cutoff.  Even low matches may open the door to solving brick walls and dead ends on family trees.

An added benefit of participating at GEDmatch is that DNA cousins can reach out directly via email, and there is a good chance they are as interested in genetic genealogy if they took the time to transfer their DNA data to GEDmatch.

Save Money and Easily Compare Kits

Through advanced tools available with its Tier 1 membership, GEDmatch enables detailed comparison and triangulation of DNA results, independent of which DTC testing company they used.

Some DNA service providers lack a chromosome browser or limit the number of people that can be compared at one time using their chromosome browser; determining where we match with our DNA cousins is currently impossible or limited at some companies. Analyzing shared segment data also provides additional critical information on segment size and position, which may help to unravel endogamy, characteristic of highly intermarried populations.  Shared segment data can be useful for applying other genetic genealogy tools such as DNA Painter.

In addition to advanced tools and admixture calculators, GEDmatch also provides several brief tutorials on how to use those tools and get more out of your DNA results.

Best of All, Uploading to GEDmatch is FREE and May Help Solve a Mystery!

Uploading and opting in to GEDmatch is simple and may provide the ONE piece of information needed for the DNA Doe Project volunteers to bring a Jane or John Doe back home, or to help other genetic genealogy groups identify violent predators. Uploading may also help adoptees reunite with their biological families.

Without help from other genetic genealogists, finding answers may be impossible, and will probably take much longer.

We hope that our thoughtful supporters will consider the many advantages of uploading and opting in to GEDmatch.

Special thanks to those supporters who have taken the initiative to upload and opt-in!

How Can I be Sure I’ve Opted-in to Law Enforcement (LE) Matching?

On the home screen, all kits that are available to opt-in to law enforcement matching have a police badge icon ( ).

A red X through the badge

indicates the kit is opted-OUT of law enforcement matching.

If the red X

does not appear, the kit is opted-in and is available for law enforcement matching.

What is Law Enforcement matching?

Law enforcement matching is an option which allows users to make their kits available for organizations such as the DNA Doe Project, and other researchers who are working on cases where the identity of a victim, criminal, suicide or accident victim is unknown. Law enforcement matching compares the GEDmatch kit generated from DNA from a forensic case to the GEDmatch kits of users willing to share. Allowing law enforcement sharing through opting in helps with the identification of unknowns.

What Has Law Enforcement Been Able to Do with GEDmatch?

As of June 2019, thanks to GEDmatch, LE has apprehended at least 59 individuals suspected of rape, murder, and assault in cold cases that go as far back as 1967. In addition to criminal cases, researchers utilized GEDmatch to solve more than a dozen Jane and John Doe cases. Without DNA matches at GEDmatch, these unidentified individuals would have likely remained nameless, and their families would still be waiting and wondering what happened to their loved ones.

Here is a list of suspects and Does identified using GEDmatch.

Will GEDmatch Change Their ToS in the Future?

Virtually every online business or service, including DTC DNA testing companies, regularly updates its terms of service (ToS). These changes are especially important for rapidly growing fields such as genetic genealogy. GEDmatch has always been available for use by everyone, including LE, and we hope this open environment of cooperation and progress continues. However, anticipating the myriad of ways researchers may utilize GEDmatch in the future is impossible, so it is reasonable to anticipate periodic updates in GEDmatch’s ToS.  Users should take a moment to consider whether they feel comfortable with participating in GEDmatch and other online DTC services, considering it is not possible to predict how these sites will be used in the future. Regardless of the ToS, protecting one’s privacy is ultimately the responsibility of the user. Participants in genetic genealogy should evaluate possible risks and benefits, and be aware of the potential for unanticipated use of data.

What Parts of My DNA Does LE See When I Transfer My DNA Data to FTDNA or GEDmatch?

Remember, your raw data is not available to Law Enforcement (LE) on GEDmatch.  In fact, once the raw data is formatting for GEDmatch through a process called tokenization, it is deleted from the site.  Law enforcement is only able to see how your DNA data compares to the DNA of others on the site, assuming you and those others have opted-in.

What Crimes Have Been Solved Using These Techniques with GEDmatch?

Jane and John Does