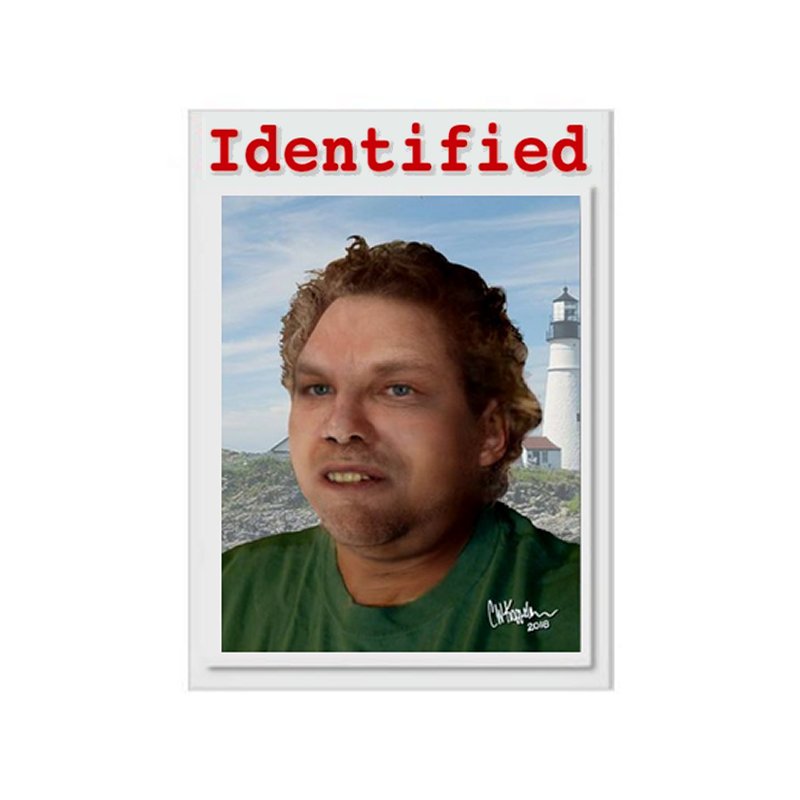 Description
On May 2, 2014 a landlord discovered a white, male tenant dead in his apartment on Main Street in Oakland, Maine. “Alfred Jake Fuller” was the name the man had provided on his lease agreement. Law enforcement does not believe it is his real name. No identification was found at the scene, and there was no record in any database of a man with that name. The deceased was age 40-46, 5′ 10″, and 255 lbs. He had light brown and gray curly hair, 2-3 inches long, with a short mustache and goatee. He had a blue discoloration over his left cheek and a large mole between his shoulder blades along his spine. He wore blue sweatpants, white sneaker-type socks gray with dirt, green t-shirt, and a blue zipped jacket. The autopsy revealed the man had an enlarged heart; his death was ruled by natural causes.

Status: Identified (name withheld)
On December 30, 2018 the DNA Doe Project (DDP) announced they had made an identification in the case of a person known as “Alfred Jake Fuller.” Due to privacy concerns his real name was withheld at the request of his family. DDP volunteers worked for approximately 5 weeks to identify the deceased through the use of investigative genetic genealogy.

“Alfred Jake Fuller” was found dead in his apartment in May 2014. For four years authorities struggled to identify him and locate his family. Finally, in mid-September of 2018, the Maine Office of Chief Medical Examiner (MOCME) contacted DDP requesting assistance with the identification.

On September 26, 2018 blood samples were sent to the DNA lab at Fulgent Genetics for whole genome sequencing. In early November 2018 bioinformatics work was performed by Greg Magoon of Aerodyne Research Corporation, which produced a file suitable for upload to genealogical databases, whereupon the file was uploaded to GEDmatch. Following intensive genealogy research by DDP volunteers, on December 17, 2018 a candidate was presented to MOCME for confirmation. On December 28, 2018 MOCME confirmed the identity of the deceased. The family requested that his name be withheld and, out of respect for their privacy, DDP is honoring that request.

DDP wishes to acknowledge the contributions of those groups and individuals who helped solve this case: Lindsey Chasteen, Maine Office of Chief Medical Examiner, for bringing the case to us; Fulgent Genetics for DNA sequencing; Dr. Greg Magoon, Aerodyne Research Corp. (contracting through Full Genomes Corp.) for bioinformatics; GEDmatch; and our team of dedicated DDP volunteers for their hard work in solving this case.