Description
On Sunday, December 3, 2017 deputies of the Barron County Sheriff’s Department were called to investigate a fragment of a human skull found on the driveway of a rural residence in Dallas, Barron County, Wisconsin.  According to the resident, his dog apparently had dug up the fragment and brought it home. During a subsequent search of the woods near the house more skeletal remains were located. Following tests conducted by a Texas lab, it was determined the remains were that of a white or possibly Asian male between 35 and 55 years old and standing between 5’8 and 5’11. The deceased had suffered a gunshot wound to the head and the case is considered a homicide.

June 23, 2020. Working in conjunction with the Wisconsin Department of Justice (WDJ), the DNA Doe Project (DDP) identified the remains recovered from a wooded area south of Barron, Wisconsin in December 2017 as those of Gary Albert Herbst. Authorities believe Gary to be a homicide victim based on the evidence of a gunshot wound to the head.

Special Agent Joe Welsch of the WDJ contacted DDP in January 2019 for assistance in identifying the unknown man. Following sequencing of the DNA in late 2019, advanced bioinformatics ultimately resulted in a usable file which could be uploaded to GEDmatch.com. Research by DDP volunteer genetic genealogists began on February 25, 2020. In less than two days, team leaders contacted Agent Welsch to offer a likely identity for the John Doe. Agent Welsch was able to secure a DNA sample from a close relative which confirmed the identity of the homicide victim as Gary Albert Herbst. 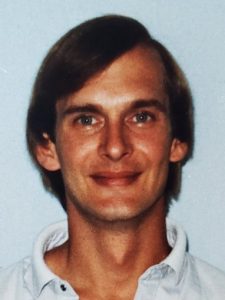 DDP wishes to acknowledge the contributions of those groups and individuals who helped solve this case: the Barron County Sheriff’s Office; Special Agent Joe Welsch of the Wisconsin Department of Justice who brought the case to DDP; the University of North Texas for providing DNA samples; DNA Solutions for extractions; HudsonAlpha Discovery Life Sciences (formerly Hudson Alpha for Biotechnology) for sequencing; Dr. Gregory Magoon, contracting through Full Genomes Corporation, for bioinformatics; GEDmatch for providing their database; and, of course, the DNA Doe Project’s talented team of volunteers.

For more information on the search for the identity of Barron Co John Doe 2017:
Links to more articles for Barron County John Doe 2017

Update:
On Thursday morning November 19, 2020 the investigation into the murder of Gary Herbst culminated in the arrests of his wife and son. Herbst was the Barron County John Doe whom DDP identified earlier this year.
Links to more information:
Charges filed for man killed by wife and son