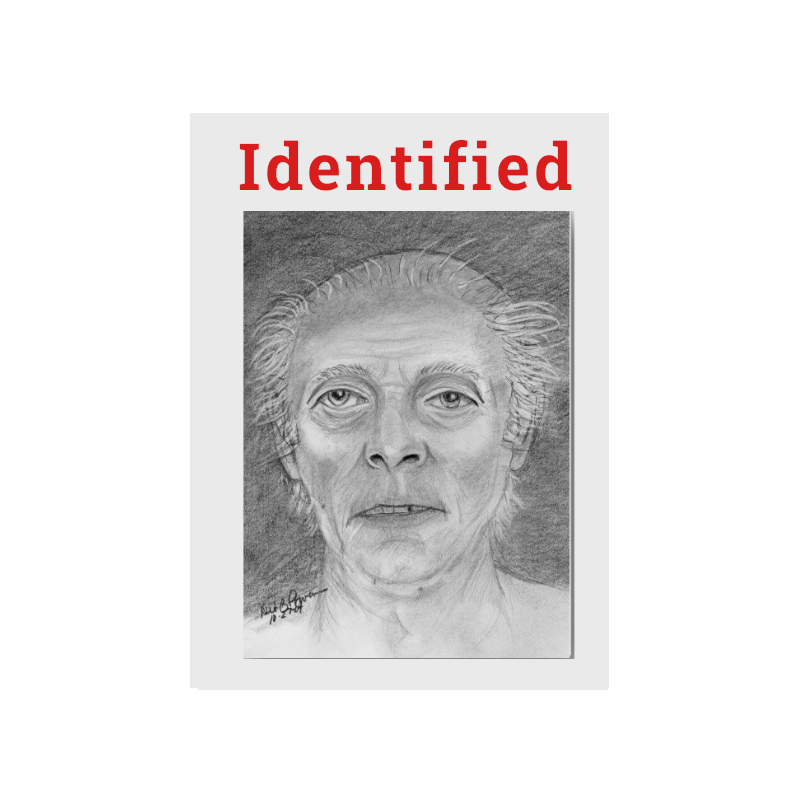 In the early morning hours of October 19, 2004, the body of an adult Caucasian male was found in downtown Phoenix, Arizona, in the area of Central Avenue and West Monroe Street. The man’s injuries suggested that he had fallen from a tall building.

The individual was estimated to be 40-60 years old, approximately 5’7” and 145 pounds.  He had blue eyes, gray hair and was missing many of his teeth.  A surgical implant in his right ankle indicated a previous surgery, and he may have walked with a limp.

He was wearing green Levi’s jeans, size 32X34, and a black belt.

Phoenix, AZ – A man who had been unidentified since he was found in the area of Central Avenue and West Monroe St. in downtown Phoenix on October 19th, 2004 has been identified as Frank R Beck, originally from Pennsylvania. Beck’s injuries suggested that he had fallen from a tall building, and investigators at the time were unable to establish his identity. Earlier this year investigators from the Maricopa County Medical Examiner’s office brought the case to the DNA Doe Project to use investigative genetic genealogy to determine his identity by researching his genetic family tree.
Frank R. Beck, age 57 at the time of his death, had experienced homelessness in his later years and had lived in Arizona since the 1990s. One of the few early clues investigators had to his identity was a surgical implant indicating he had experienced a serious injury and surgery on his right ankle. They were unable to trace the implant, and the investigation went cold for nearly 18 years until this summer.
The DNA Doe Project has partnered with local agencies on 15 cases in Arizona, including four that are in active research, four that have been solved, and others that are in various stages of the lab and research pipeline. This case was assigned to DNA Doe Project’s first summer apprentice program where 8 apprentice genetic genealogists worked under the supervision of experienced lead volunteers to learn and practice the techniques used by the DNA Doe Project on an actual case. “Thanks to our excellent relationship with Phoenix Police Department and The Maricopa County Medical Examiner’s Office, we were able to restore the name of this former John Doe and advance the field of investigative genetic genealogy by using this case for an education initiative,” said Director of Education and Development, Cairenn Binder.
Nadine Ashcroft, one of the participants in the program said, “When (our) team began work on the family tree for this John Doe, we noticed one of his parents had recent Scottish ancestry whilst the other had significant German ancestry.”
Team member Cynthia Gabbard added, “It has been so rewarding to see all of the pieces of the puzzle come together. Every match that we added to the tree helped come to the final result. I’m so honored to be a part of this team that has given this man his identity back.”
“By following potential patterns of X-DNA inheritance, we focused in on a particular family group,” said Ashcroft. “It’s incredible, that moment when you realize the relevant family has been identified.”
Cairenn Binder, who designed the apprentice program, emphasized, “It is of great importance to teach not only the skills that are required to practice IGG, but also the ethical values involved in this work and importance of partnership and teamwork with law enforcement. Our team thanks Detective Stuart Somershoe and Sr Medicolegal Death Investigator Christen Eggers for their trust of our organization and their continuous advocacy for the unidentified.”
The DNA Doe Project wishes to acknowledge the contributions of the groups and individuals who helped solve this case: the Maricopa County Medical Examiner’s Office, who entrusted the case to the DNA Doe Project; Genologue, LLC for extraction of DNA from blood and whole-genome sequencing; Kevin Lord of Saber Investigations for bioinformatics; GEDmatch Pro and FTDNA for providing their databases; our generous donors who contributed to this case; and DDP’s dedicated teams of volunteer investigative genetic genealogists who work tirelessly to bring victims home, including participants in DDP’s inaugural apprenticeship program.

This case was fully funded by our generous donors!