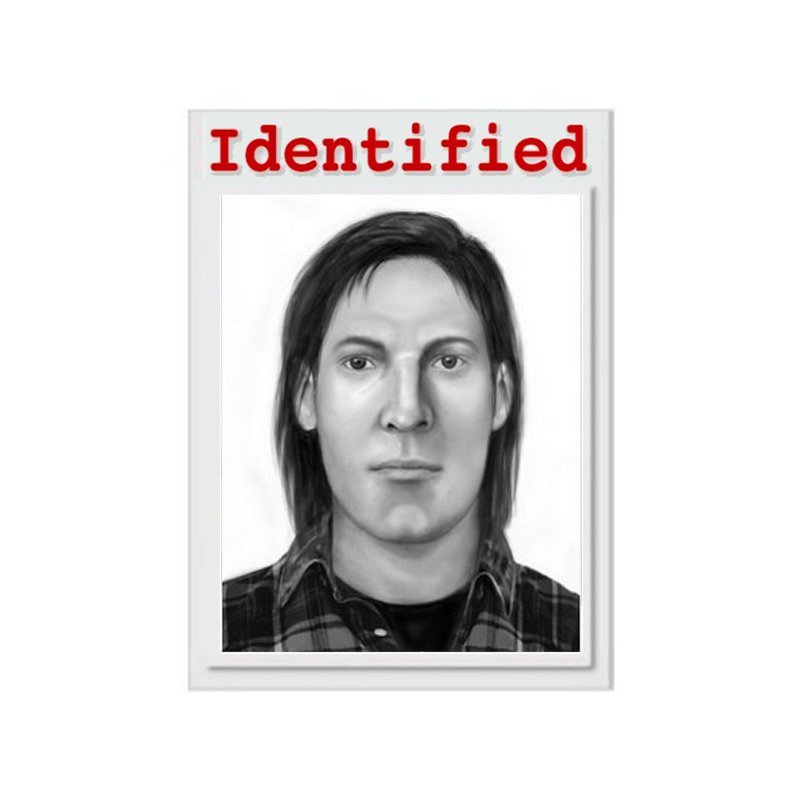 John Clinton Doe or JCD is the name given to an unidentified teen found by hunters on November 26, 1995 in a remote wooded area along Turtle Creek in Bradford Township, Rock County, near Clinton, Wisconsin.  The 97% decomposed skeleton was discovered fully clothed with distinctive, age-appropriate clothing. He lay on its stomach, arms up over his head, with a plaid flannel jacket over his back and head. He had on a black Venom heavy metal concert T-shirt and city camo pants.  One black 1994 Nike Air Bound basketball shoe lay beside the remains.

During the initial autopsy in 1995 the skeleton was examined by a forensic anthropologist and determined to be a Caucasian male, 17-20 years old who stood approximately 5’6” tall and weighed approximately 140 pounds.  He had long, straight, collar-length brown hair.

It was estimated that the young male had been deceased for approximately one year, placing his time of death during the fall/winter of 1994.  The official cause and manner of death are undetermined.  Investigators theorize the teen passed out or went to sleep and was overcome by hypothermia.

Stable isotope analysis conducted in 2014 on bone material revealed JCD had spent much of his growing up years in Wisconsin, Minnesota, Iowa, or Michigan, reinforcing beliefs he had been living in the area where he was found.

Status Identified
Skeletal remains discovered in a remote wooded area along Turtle Creek near Clinton, Wisconsin in 1995 have been positively identified as Carl J. Isaacs, Jr. after comparison to the DNA from his deceased father.

The DNA Doe Project previously announced that the case had been solved in 2019, but withheld the name at the request of authorities.

Carl J. Isaacs, Jr. was identified after only two weeks of investigative genetic genealogy work, but confirmation of the identification would have to wait until this year when his DNA was compared to a close family member by the University of North Texas School of Biological Science Forensic Unit.

“Usually, we are able to use the DNA of living relatives to confirm the identities of our Does, but in this case there was no one close enough to meet the standards set by the medical examiner,” said DNA Doe Project co-founded Margaret Press. “It’s a testament to the commitment of the Rock County team to definitively solve this case that they took the extraordinary step of exhuming Mr. Isaacs’ father in order to confirm the identification.”

Jack Friess, a private investigator from Stevens Point and who had been working on identifying John Clinton Doe since 2013, referred this case to the DNA Doe Project in 2018. Mr. Friess took a co-leadership role on the casework within the DNA Doe Project, and was a dedicated advocate for the use of investigative genetic genealogy and the case of John Clinton Doe particularly. His leadership helped the genealogists to identify Carl Isaacs, who had walked away from Walworth Co jail in April 1995. “Mostly because of the remote location of the body, we always assumed JCD was a local boy, and about that we were right. We just were unable to identify him using traditional (old school) investigation tools. I’m honored to have been part of finally giving this young man back his name,” he said. Mr. Friess retired from his volunteer role as Case Information Specialist with the DNA Doe Project earlier this year.

The DNA Doe Project wishes to acknowledge the contributions of the groups and individuals who helped solve this case: the Rock County Sheriff’s Office, who entrusted the case to the DNA Doe Project; Bode Technology and Fulgent Genetics; Gregory Magoon for bioinformatics, UNT forensic laboratory; GEDmatch Pro for providing their database; our generous donors who contributed to this case; and DDP’s dedicated teams of volunteer investigative genetic genealogists who work tirelessly to bring victims home.